MSK Review: Ultrasound of the Knee 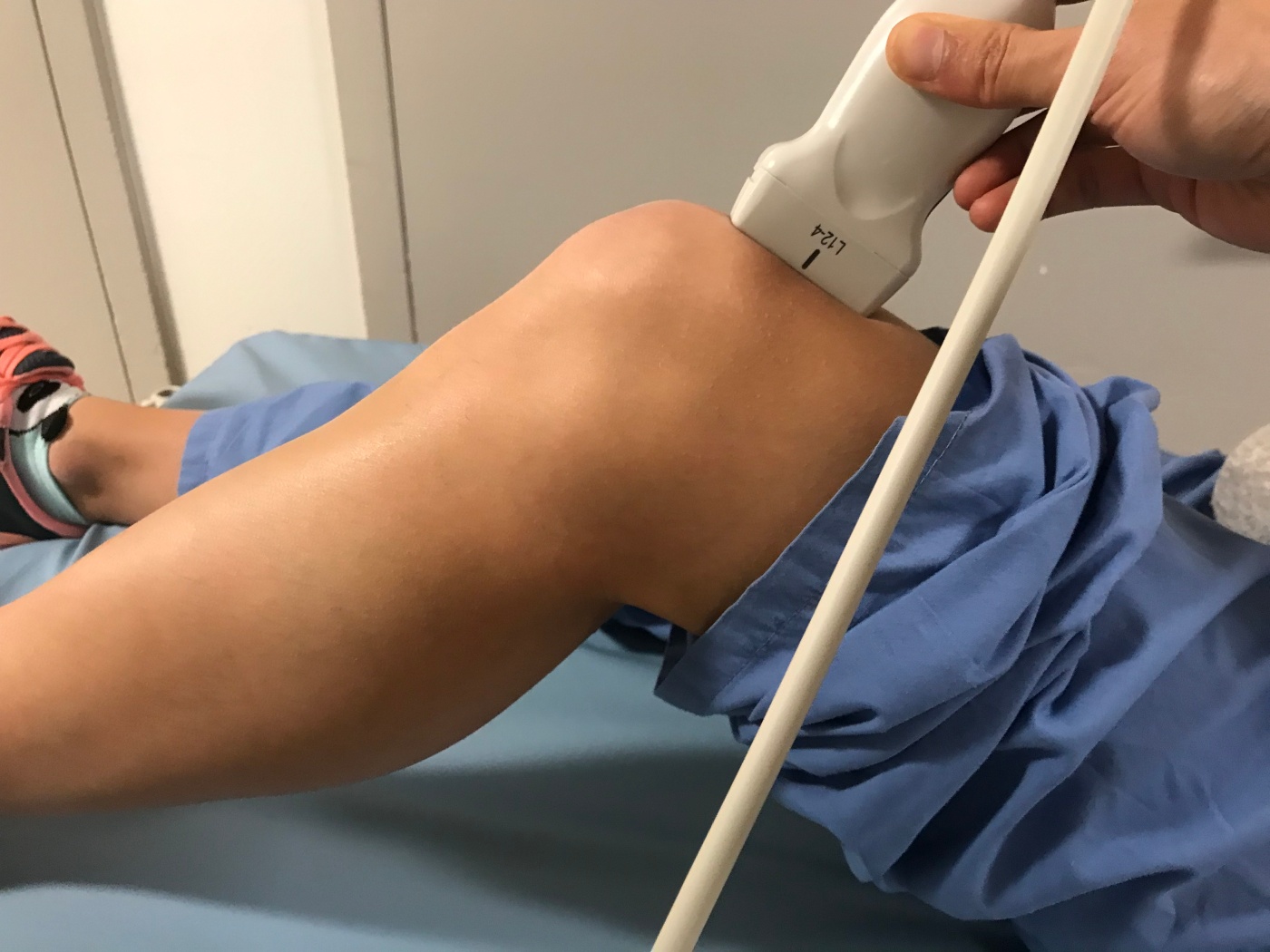 Anterior compartment Start with the patient in supine position and the knee slightly flexed (figure 1). Place the probe in the sagittal plane just proximal to the patella, along the long axis of the quadriceps tendon. Evaluate the complete quadriceps tendon, medial to lateral, in both the long and short axes (figures 2, 3). The tendon can be follow proximally to evaluate its four muscular components: rectus femoris, vastus medialis, vastus lateralis, and vastus intermedius (figure 4). Just deep to the quadriceps tendon is the suprapatellar recess (figure 6). Positioning the knee in slight flexion preferentially drives fluid into this recess, making it a sensitive area to evaluate for knee effusions. From here, the transducer is moved inferiorly in the sagittal plane, just distal to the patella until the patellar tendon is identified. Again evaluate the entire tendon in longitudinal and transverse orientations. This region is also evaluated for bursal fluid superficial to the patella (prepatellar bursa), and anterior to the patellar tendon (infrapatellar tendon). Remember to use light pressure in order to avoid displacing and missing fluid in this area. Lastly flex the knee to 90° and evaluate the femoral trochlear cartilage by placing the probe in a transverse orientation. The cartilage should appear hypoechoic and of uniform thickness.

Evaluation is begun in coronal plane by finding the MCL along the medial aspect of the joint line. Evaluate the entire extent of the MC in long & short axes. The medial meniscus can also be seen deep to the MCL, between the femur and tibia (figure 8). The medial meniscus should appear triangular and hyperechoic. The probe can then be moved anteriorly and posteriorly to evaluate the anterior & posterior horns of the meniscus. Finally, evaluate the pes anserine tendons by moving distally along the MCL to about 4-5cm beyond the joint line and slightly anteriorly (figure 9). Here the insertions of the pes anserine tendons (sartorius, gracilis, and semitendinosus) can be evaluated, as well as the bursal fluid below them. The sartorius is the most anterior tendon, the semitendinosus is the most posterior tendon, and the gracilis is between the two.

Start on the patellar tendon in long axis and move probe laterally. The first longitudinal structure will be the IT band (figure 11). Follow the IT band proximally, focal thickening or surrounding fluid at the distal femur can indicate IT band friction syndrome. Once evaluation of the IT band is finished, the transducer can be moved further laterally in the coronal plane until the LCL is visualized (figure 13). Along the joint line the lateral meniscus should also be visualized. Move the probe anteriorly and posteriorly to observe the anterior and posterior horns. As with the medial meniscus, the lateral meniscus should appear triangular and hyperechoic.

Ultrasound for Meniscal Tears– The Literature

The Value of Ultrasonography in the Detection of Meniscal Tears Diagnosed

🎉What an incredible night celebrating our retiring Chairman Dr. Jonathan Olshaker. Congratulations on your incredible 19 years as the Chair of the BMC Department of Emergency Medicine. He was our second department chair ever and our longest serving chairman. We are so proud to announce his appointment as Professor Emeritus as well as the newly announced endowed lectureship series in his name.
🔈 “Airway resident to Trauma 1.”
📰 A big welcome to all of our new Attendings starting this month!
🚨 Applications are open for the Subsidized Visiting Elective Program at BMC!